In 1970 the Carter Cup Competition increased to 24 Member Clubs with some “senior” clubs entering. 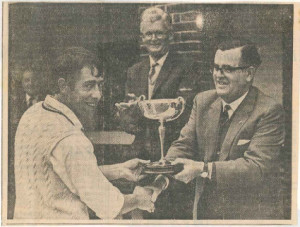 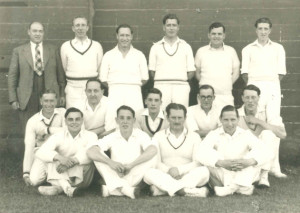 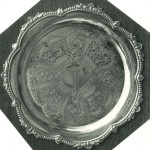 In 1971 The Carter Cup Competition increased to 32 Member Clubs with reserves. The “Bob Carter Plate” Competition was introduced for First and Second Round losers.

In 1972 Clubs paid their tribute to Mr Bob Carter, when at a special supper the then Ingham chairman Jack Borrett presented Mr. Carter with an inscribed silver ashtray sunk in a brick.

Referring to troubles in the building industry at the time, Mr. Carter said Sport was a great help in shrugging off worries and he was delighted to be associated with a game that could be a means of conciliation.

During the 1970’s Eric Bedwell co-opted George Tippell on to the committee who succeeded Eric as organiser & holder of the records. 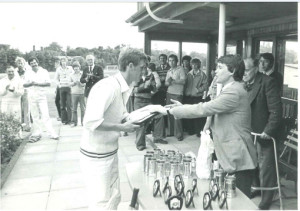 August 1975 Dougie Mattocks receives the Bob Carter Plate on behalf of Lowestoft Cricket Club from Robert Carter. Standing behind Mr Carter is Eric Bedwell, founder of Cromer Cricket Club, organiser of the Carter Cup and a legend in the world of Norfolk Cricket.  Eric, a retired Squadron-Leader, was described as a “keen bowler and obstinate batsman” did all in his power to upgrade Cricket in Norfolk. 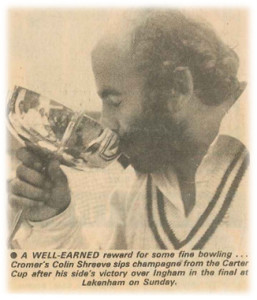 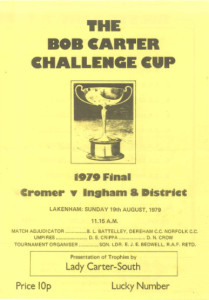 In 1975 the Carter Challenge Cup was renamed the Bob Carter Cup in memory of Mr Bob Carter who died in 1974 aged 51. Keith Skipper, Eastern Daily Press club cricket correspondent at the time wrote: “Norfolk cricket lost a fine friend with the death of Mr. Bob Carter, a man who brought a refreshingly personal touch to local sporting sponsorship. Since his firm agreed to back a new 60-over Sunday knock-out competition in 1969, the Carter Cup has grown in status and popularity – a tribute to the genuine interest Mr. Carter
took in its progress”.

Proud moment for Cromer skipper Graeme Wilton as he receives the Carter Cup from Lady Carter-South at Lakenham on Sunday. It was Cromers fifth cup victory in 11 years.

While Mr Bob Carter’s health permitted, he attended as many matches as possible and the Carter Cup supper became a social highlight among cricketing enthusiasts .

Bob Carter took pains to push forward the players, organisers and umpires as the people who really mattered. He saw the role of his firm as important only in that it helped to promote the interests of Norfolk cricket. Self-aggrandisement was no part of the game. 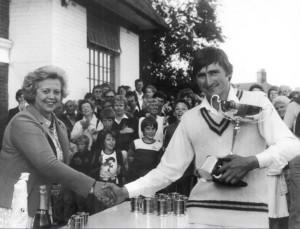