The Story of the Carter Cup 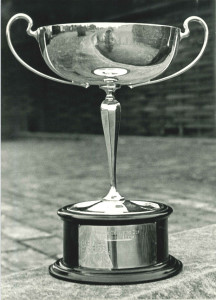 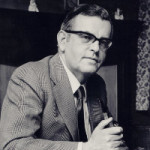 The Carter Cup was first sponsored in 1969 by Mr Bob Carter father of the present Chairman of the R G Carter Group.

This senior Norfolk contest was initiated by Eric Bedwell. It had begun its inaugural 1969 season as the Norfolk Cricket Association’s 60-over Sunday KO Tournament.

Quarter-finals had been completed when the Carter Cup came into existence after Bob Carter was approached by Eric Bedwell. It was Bob Carter’s belief that Sponsorship of Sport was a duty of local firms.

Eric Bedwell, who had been an enthusiastic cricketer in his 21 years with the RAF, also helped found the Norfolk Cricket Umpires Association. 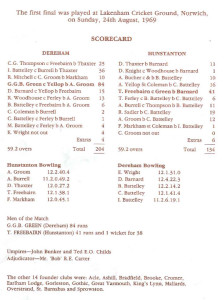 Eric Bedwell’s task was to obtain participants and from the first 1st Round draw it appears that generally the senior clubs were sceptical of the merit of the new competition. But after a year’s work Eric had 16 member clubs for the inaugural competition.

A draw was carried out for the whole of the tournament, a complex system that persisted for many years with rules devised from the National Competition.

The first final was played at Lakenham Cricket Ground on Sunday 24th August, 1969 when Dereham beat Hunstanton by 204 to 134.

The other founder clubs in the Carter Cup were Acle, Ashill, Bradfield, Brooke, Cromer, Earlham Lodge, Gorleston, Gothic, Great Yarmouth, King’s Lynn, Mallards, Overstrand, St.,Barnabas and Sprowston. Some of these were only small clubs but they helped to plant the seed of the first Sunday K O competition in Norfolk – a competition some bigger clubs said would never work. The aim of the original sponsorship was to benefit both club and county cricket in Norfolk by helping to raise standards of play.